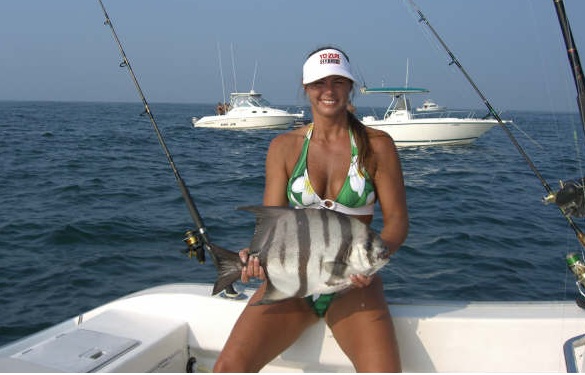 Spade fish what are they good for whoa hum hey hey, Absolutely eating
Yes think 1970’s songs ok bad pun.  This is a question which most people
think of as no they are no good to eat. Wrong they are an eating fish
everywhere but Florida that is. No I do not know why but in South west
Florida many people either never heard of them or consider them a trash
fish, Sad
But really these tough little fish which inhabit our local reefs can be
found from New England all the way to Brazil. Often called Angel fish, as
the dorsal and anal fins protrude far back beyond the tail, giving Spade
fish the appearance of the angel fish people would have in their
aquariums.
Spade fish are considered a game fish in the Carolina’s and many other
places. One thing is that Spade fish here locally are not usually too big
maybe 2 to 3 pounds or smaller but they can reach 10 pounds. It is common
to catch small hand size Spade fish in cast nets when people are looking
for bait. I do not know of anyone who ever caught fish using Spade fish as
bait but it should be possible.

The reef off Alligator creek, Is as good a place as any to look for Spade
fish although you can find them in many of the local canals or even right
up by the mangroves,

Spade fish are not a common catch in the canals or on the flats for the
simple reason is that they have a very small mouth, which makes them great
bait stealers, and often people blame pin fish for nibbling their shrimp
to pieces when it could have been a swarm of Spade fish. Yes Spade fish
travel in schools and will swarm a food source. I have watched a school of
Spade fish attacking a floating red fish carcass. You would have thought
it was a school of piranha the way they kept hitting it tearing off tiny
little pieces at a time. Do not worry you can swim safely even if they
would attack a person. Which they would not do, they have such small
mouths it would tickle or maybe pull hair, but bite you is not possible.

Keep the mouth of the spade fish in mind when you choose your hook. To
catch them you are going to need a #6 or #8 hook, I use 15 pound
fluorocarbon leader not really for the spade fish but for the other fish
which might also hit like Mangrove snappers, or sheep head.

Best bait for Spade fish Clams yes cut up small chunks of clam and try to
make sure it covers the whole hook. Tackle Rod & reel should be light to
very light; if you were a Crappie guy up north this would be a great use
of your old Crappie rods,

Rigging for  Spade fish you can free line your piece of clam or use it
under a bobber, Sinkers are not really for fishin Spade fish. Spade fish
are not great bottom feeders they are more apt to bite in the water column
than off the bottom.
We do carry clams in the store frozen, but if you see spade fish and you
are clam-less, take a shrimp break off the tail and peel the shell from
the tail, thread the soft tail meat over your hook, and when you feel the
bite set it firmly.

The other way I like to rig for Spade fish is to use a Crappie jig, buck
tail or curly tail, the small #6 hook on the 1/16 th once jig head gives
it a nice slow drop/fall when you place a piece of peeled Shrimp meat
sliced with a knife not torn from the tail of a shrimp. If you tear the
tail it is too mushy to stay on the hook. Stuff the piece of Shrimp onto
the point of the hook. When you cast it out if you are in 1o feet of water
count to 8 before you start reeling it in, then reel slowly, with a slight
jigging action to the rod when you are reeling. Don’t get in a hurry give
them time to figure out there is meat there once you start catching them
it should be nonstop for quite a while.

Spade fish respond to chum very very well, get your boat anchored, put out
your chum bag; then get started setting the rods up. Always get the chum
in first while you are rigging them chum has time to start working bring
in the fish. 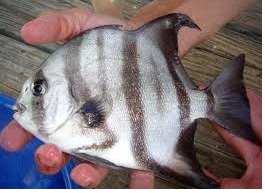 Spade fish are omnivores they will eat anything animal or plant, one
weirdest part of their diet is they eat the common clear jelly fish which
clog up the Harbor every summer. Hoo-Ray for the Spade fish eat all you
can little buddies. Sea turtles are the only other thing I know which eats
those jelly fish.

Cleaning a Spade fish can be done by standard fillet cut slabs from each
side, but that can be tough with their leathery skin and heavy bones, So I
get a cut started along the back and then slowly work the meat off each
side of the fish leaving the ribs intact, in takes a little extra time but
is actually easier.
Once you have filleted the meat from the skin you will have a grayish
looking fillet, Surprise it will turn nice white & flakey when you cook
it. Again how strange is that?

Here is a recipe for you to try. 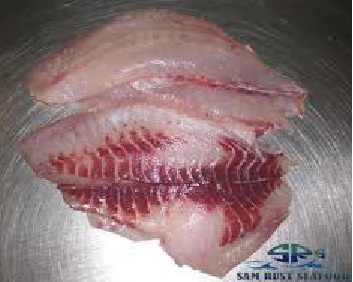 Mako's spadefish recipe:
After skinning and cleaning fish, rinse them in cold water, then put spade
fillets in large plastic pan of lemon juice, seafood marinade (most any
type bought at store) and ginger spice. Soak overnight. Take steaks out
but keep them in baste. Make mixture of corn meal, small amount of Cajun
seasoning, rosemary leaves and garlic salt. Heat a pan with olive oil to
cooking temp. Cover meat side of fillets with mixture then put into pan
(no need to remove skin from fillets) and cook until golden brown. Serve
to wives, girlfriends & mistresses and wash down with generous amounts of
beer :}

Well you have fun out there enjoy your day, there is so many weird
strange fish to play with you should be able to stay busy for a long time.