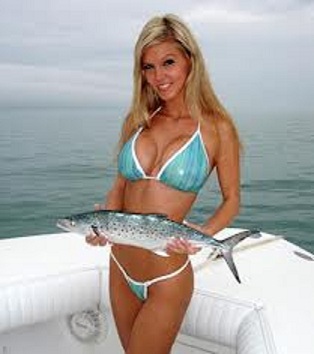 These feisty fish, are Travelers
making their way from the South of Florida
to the northern gulf, each fall they return to
southern Florida as the waters cool, then in the spring
head back north. Remind you of anybody you know?

A favorite of fisherman as they will attack anything shinny
This however can be a problem, as they have sharp teeth,
much like a blue fish, or a barracuda, So teeth and wanting to
eat anything which moves, including your swivel, or even your
knot where you tied your line and leader together. 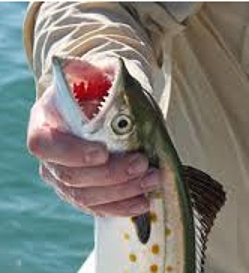 When they bite the swivel
they also are biting the smaller main line
usually biting through it.
So when it comes to mackerel and swivels
black instead of silver is your best bet.

They are a brightly colored fish with Green, yellow, silver, blue,
they are beautiful fish and very active on the line,
while not a great jumper,
I have had many do back flips out of the water,While being reeled in.
Just a real good looking Fish

When choosing Rods & reels for Spanish don't go crazy with big Tackle,
yes I know the last one bit through your line, But that is the fun of it.
I like to test my skills and riggin ability So I will often use, crappie rods
Yes the same as I would for blue gills and specked perch 2 to 4 pound test,
seldom do you catch one over 4 pounds, So light tackle is a blast,
the normal fisherman will use 10 or 12 pound mono or 10 to 20 pound braided line,
The leader is a tricky choice, I use lost often is the cheap ones ready made 30 pound black steel.
Black leader does not get bit off as much as the sliver. You can use mono or fluorocarbon leader
anything over 20 pound. 40 is better, But they are not shy when they want to eat nothing stops them.

Some good lures for Mackerel are

The got-cha is the mackerel king Just look at their Logo. 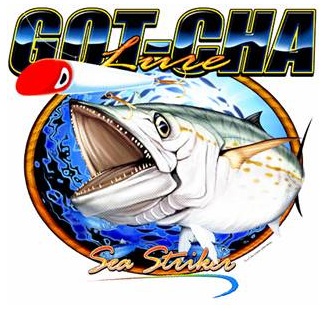 Cast it out and reel it back,
You can jig it or jerk it,
but what ever you do just make it
stop ever once in a while,
and the Mackerel will slam it.

This is another lure Spanish will slam.
The Maverick Golden Eye.
Mavericks come in 2 sizes, while both work
I have better luck with the smaller 222 size.

As far as color well if it
Aint Chartreuse it aint no use.

Cast it out or Troll a Maverick, If your not good as casting just let it out as you idle your boat along
between 2 and 3 MPH, or 900 to 1100 rpms. start with 30 feet behind the boat. If you are trolling 2 one off each side
of the boat, make sure one is much farther back than the other. lets say 30 & 65 feet out. This is important because if
you turn the boat and Your lures are the same distance out they will tangle together and what a mess. make sure any time
you are trolling to keep your lures far apart from each other.

The Gulf group of Spanish mackerel spawn in batches from April to September.

Spanish mackerel are similar in appearance to small King mackerel and Cero mackerel.
All three are very similar in shape and coloration. They may be distinguished as follows: 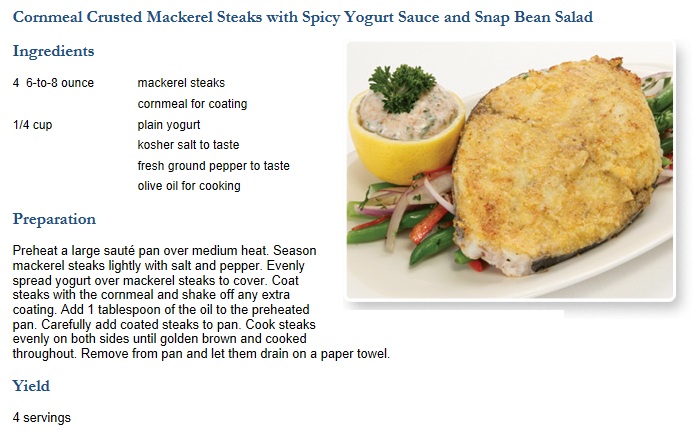 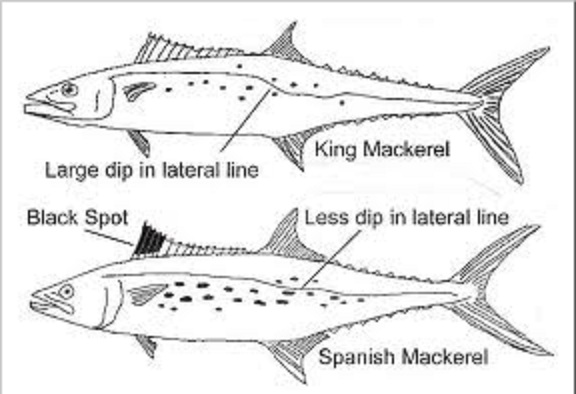 The lateral line on Spanish and Cero mackerel slopes gradually from the top edge of the gill to the tail.
In contrast that of the king mackerel takes an abrupt drop at mid-body.

The first (spiny) dorsal on Spanish and Cero mackerel has a prominent black patch.
The King mackerel has none.
As all three species normally keep the first dorsal folded back in a body groove,
this difference is not immediately evident.

Spanish mackerel have prominent yellow spots on the flanks at all sizes.
In addition to such spots, Cero mackerel have one or more yellow stripes along the centerline.
Young King mackerel have similar, but slightly smaller spots;
these fade away on individuals weighing over 10 pounds
but they may still be seen as spots of slightly darker green on the upper back from some angles of view.

Spanish are very well-known for taking lures.
So unlike most fish I often tell people to troll lures they don't use any more or don't like much,
The lures need to be smaller 3 inches or less. and while it is thought that the Mackerel will bite through the line,
which is sort of true it is the buddies of the one you have hooked which bite through the leader/ line.
When one Mackerel gets hooked up its excited thrashing around makes the rest of the School think it has the best food ever,
and they come to get in on the feast. Mackerel will hit anything which moves or makes noise,
which if you think about it, if a mackerel got 4 foot I don't think I would go in the water.
Getting back to the point the one hooked gets the other excited and they start darting about looking for the thing which got the other fish so excited and your swivel or the knot which attached the leader to your line is a perfect target even where your line is hitting the water,
the V it makes while you reel in is fair game to crazy feeding Spanish.

If you are looking for very good lures to troll,
try the Maverick Golden eye in the small version or the Storm twitch these lure have a lip on them and do not spin when you troll them,
use a light rod. Lets say a 6 to 12 pound class 7 foot spinning or bait cast set up with some thing 6 pound test or more.
I troll at about 3 miles per hour for the mackerel.

Another trick I learned is to keep the rods I am trolling in front of me,
I mounted Rod holders on the front deck of my boat so I can watch where I am going and see when a fish hits.
If you do not have front mounted Rod holder any couple of your friends will do just fine.
If they are in front of you, you can see when the rod gets hit and stop the boat if the people or Rods are behind you,
you may not find out about what is happening until you are out of line.

To make sure the rods and lures are working right watch the tip of your rods.
They should be vibrating the tip of the Rod that is.
The lures have a lip on the front of them which when pulled through the water causes them to be pulled under and the force of the water gets deflected off of the lip causing the lure to swing side to side imitating a swimming action of a bait fish. that Side to side movement of your lure, makes the tip of your rod bounce ./ vibrate in time with the side to side action and So when you look at your rod it should be bent a little and vibrating, if the rod end is bouncing or Best case pulling hard, meaning joy of joys you have a fish on, or if pulling down a bit then rebounding back up would mean a very small fish or a weed has been caught in the lure. either way reel in clear the lure and start again.
If you are going to cast for mackerel I would suggest Spoons or Got-cha lures. Spoons should be small Like the Clark Squid Spoon #0 or #00 problem is they are too light to cast so I put a water fill-able casting bubble on the line a head of the Spoon to give it weight in the air but once the bubble hits the water it is nothing just a plastic bubble full of water. The got-Cha lure is different it is a jig type bait and should be reeled in moderately fast with a jigging action, which means while reeling steady you would sharply lift the tip of your rod. Then lower it, repeating this the whole time you are retrieving the lures

Spanish Mackerel are not a fish to catch and freeze for later, The meat is not tasty after being frozen. So I only keep them if I am going to have time to clean and cook them that night. If I am going to have time I will keep 3 for two people, The seem like more than you would want but if you have a grill some butter, and McCormick brand lemon herb Spice. It may not be enough. I butter one side of the Fillet, then sprinkle some of the lemon Herb on it and place that side down on the hot grill. Oh yes when you fillet a Spanish watch for bones by the belly, Spanish are tricky to fillet properly and get out all of the bones. after removing the skin rub your fingers up and down the meat. Your finger can feel bones way better than your eyes can see them. When the side facing down on the grill is brown I butter the top side add some seasoning and fill it over. brown on both side is done.
Serve with your choice of side dish as you will only be thinking about eating more of the mackerel any way.
Good luck out there, have fin and be safe
Fishin Frank 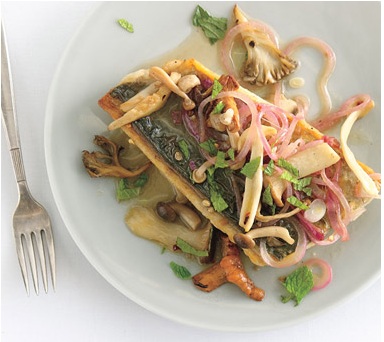 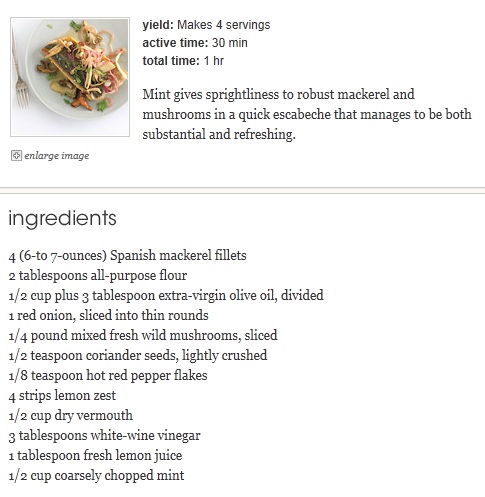 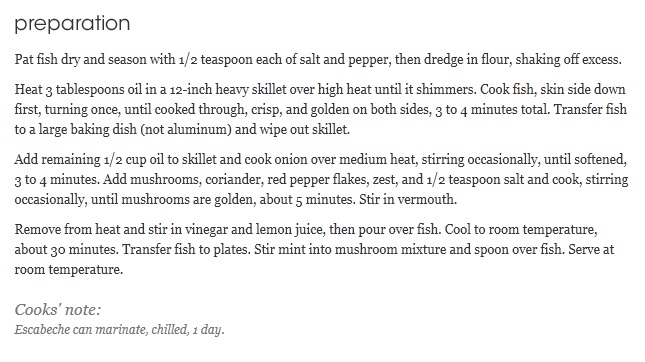